Film coatings are chosen by their stability needed. One factor is the thickness of the film. The thicker the more stable they are. On the opposite side thicker films show more undesirable electron interaction. Combined films (Formvar/Carbon) offer the highest stability.

A thin film of pure formvar resin. The thickness range is as follows:

A thin film of pure carbon deposited on one side of the grid. The thickness range is from 3nm to 30nm. Pure Carbon Films are mechanically not as stable as Formvar Films. On the other hand they show better electrical- and heat conduction in the electron beam.

The thickness range is as follows:

A formvar film stabilized with a thin film of Silicone monoxide. Silicone monoxide produces a desirable support film because it offers low background contrast and it is stable under the electron beam and it is more hydrophilic than carbon film.

A deposition of 250 Angstroms thick Beryllium onto the 0.005" thick, 25x25mm squares of a Cu substrate. The Beryllium can be removed by dissolving the substrate in nitric acid (50:50). The Beryllium film will then be removed from the acid, washed in distilled water and mounted on TEM grids. A Beryllium support film will reduce background interference to a minimum and it is particularly useful where analyses for C or Si are required, so that these alternative supports cannot be used. Another advantage of the Beryllium support is its very fine grain size which produces a very sharp ring pattern for in-situ calibration.

This carbon coated film on a broken pattern consists of woven-mesh-like holes of different sizes and shapes. This type of pattern provides support but does not interfere when observing specimen sections.

A thin piece of carbon with numerous round holes of various sizes.

C-flat™, Au-flat™ and CD-flat™ grids (formerly manufactured by Protochips™ now by Electron Microscopy Sciences, EMS) are ultra-flat, holey carbon- or gold alloy film coated support grids for (cryo-)TEM. Unlike competing holey carbon films, they are manufactured without plastics, therefore clean upon arrival and without any residue to contend with. Artifacts such as excess carbon and edges around holes are eliminated.

All products in the C-flat™ family provide an ultra-flat surface that results in better particle dispersion and more uniform ice thickness. They are fully specified by 4 parameters: the hole diameter and pitch of the holey carbon/gold film and the material type and mesh size of the TEM grid. Applications (TEM, cryo TEM, cryo-ET, SPA, automated TEM). 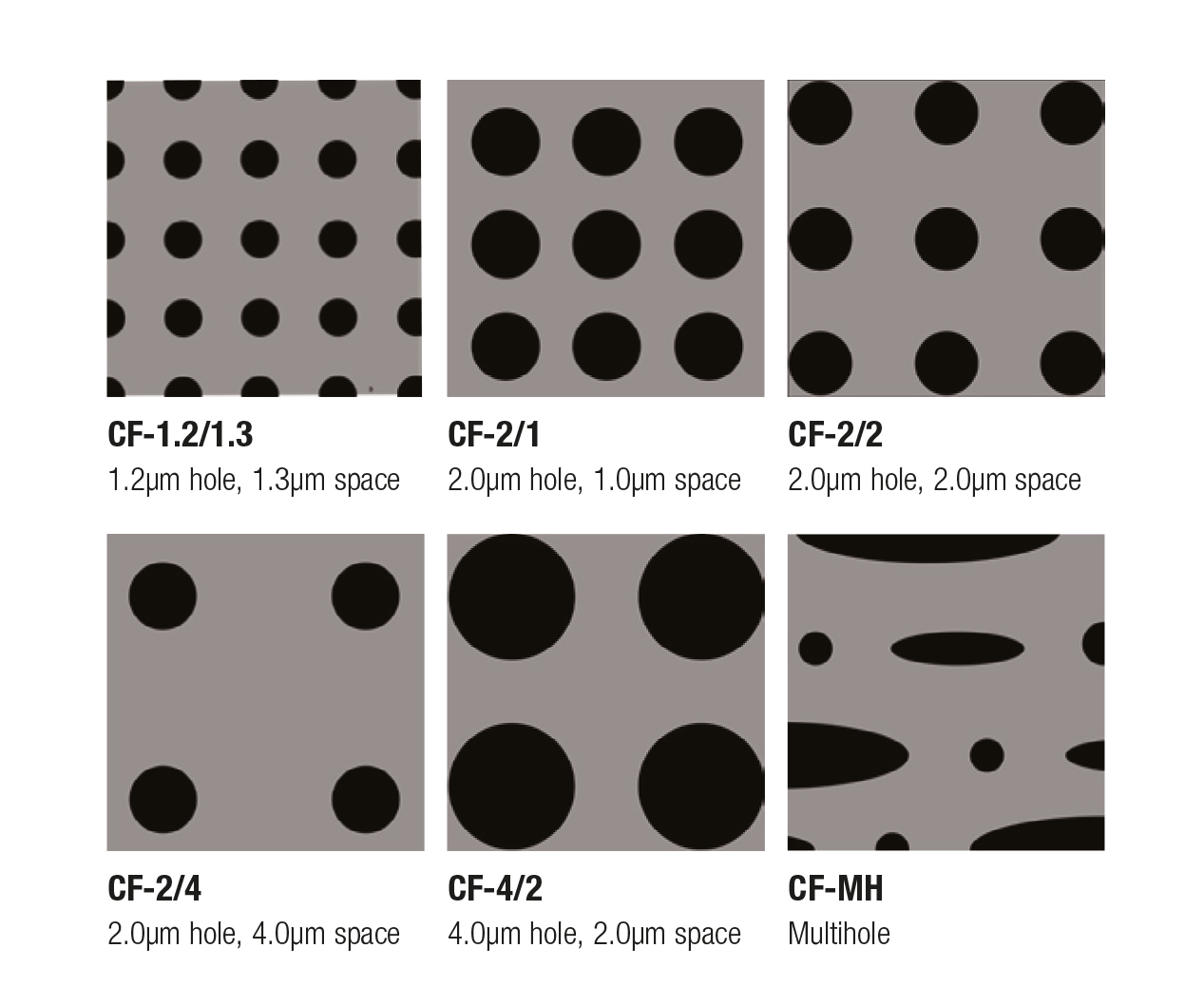 QUANTIFOIL ® is a perforated support foil with pre-defined hole size, shape and arrangement. It has advantages in electron microscopy (EM) or low-energy electron point source (LEEPS) microscopy when compared with conventional holey film. QUANTIFOIL ® is offered with circular and square, orthogonal arranged holes. Films with different hole sizes and bar widths are available. Carbon is the standard material that makes the foil. QUANTIFOIL® is a superior quality of holey carbon film, which facilitates the use of automation in TEM.